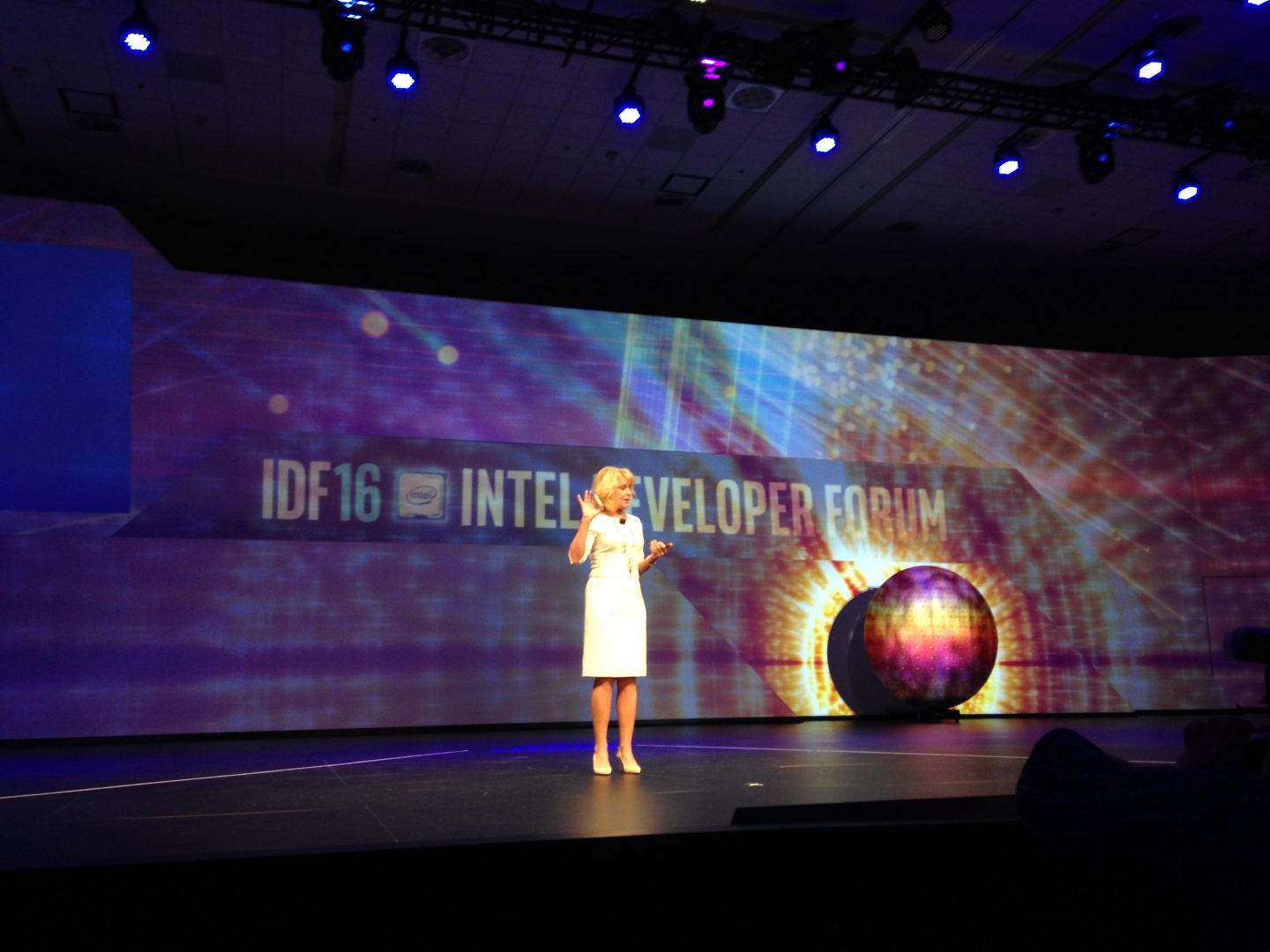 When you think about the last two decades of data center innovation that has been driven on a foundation of Intel architecture, all of the technology advancements that have been driven from virtualization to, advances in supercomputing and advanced analytics have one thing in common: they were most likely discussed at the Intel Developer Forum prior to achieving broad market adoption.  Today, the next chapter of Intel’s vision for the data center was unveiled by Diane Bryant, Intel Executive Vice President and General Manager of the Data Center Group.  The themes of her talk? Cloud computing, network transformation, and artificial intelligence.

Cloud for All delivers thousands of intelligent, interconnected clouds

The foundation of the next wave of compute innovation is the delivery of thousands of clouds delivering millions of services and connecting billions of consumers and businesses worldwide.  This is the vision of Intel’s Cloud for All initiative, working to accelerate easy to deploy cloud solutions that are self-service, self-managed and self-aware.  Diane shared the advancement in enterprise cloud deployments from 12% of enterprises in 2014 to 20% this year.  Our work in delivering the largest OpenStack developer team through Cloud for All is helping to drive enterprise adoption with over 60% of enterprises either already running OpenStack or stating plans for future deployments.

We are taking this work further in delivering efficient, easy to deploy infrastructure with Rack Scale Design (RSD).  Diane described the importance of delivering an open source RSA software and API specification working with industry leaders and aligned with the DMTF’s Redfish* specifications.  With 1.2 version software available, infrastructure providers including industry leaders Dell, Ericsson, Inspur and Quanta are delivering RSD based solutions to the marketplace with expected deployments by cloud and communications service providers later this year.

Building cloud infrastructure at a scale to address fourth wave computing requirements also requires a new approach to data center connectivity, and Diane highlighted that this demand is a golden opportunity for Silicon Photonics announcing to the crowd that Silicon Photonics products from Intel are in volume production now. Silicon Photonics has the potential to accelerate data transfer rates making the transition to 100G possible at about half the cost in high volume of traditional optics. This cost savings is delivered through wafer scale manufacturing combined with Intel’s unique approach to silicon photonics delivery employing a hybrid laser and utilizing Intel manufacturing technology and scale. http://itpeernetwork.intel.com/bringing-light-intels-silicon/

Diane was joined onstage by Kushagra Vaid‎, General Manager of Azure Cloud HW Engineering at Microsoft who shared his desire to connect the next generation of Microsoft data centers with silicon photonics and shared his perspective that the technology will be critical in the delivery of a future fueled by the hybrid cloud .

With thousands of clouds delivering millions of services to billions of consumers and businesses, communications service providers must transform the network to deliver service agility and scalable performance from the core of the network to the network edge.  Diane updated the audience on industry progress towards enhancing networks to become more agile and intelligent offering customer value today while paving a foundation for the advent of 5G. To share this progress, John Donavan of AT&T joined Diane onstage to share their progress towards a goal of virtualizing 75% of their target network by 2020. AT&T views this transition as a cloudification of the network fueled by Intel architecture based servers delivering services across 76 countries and ultimately resulting in cloud capability making ATT the  “Super Seven+1” of the world’s largest cloud service providers.

Ushering in the era of Artificial Intelligence

For the final section of her keynote, Diane turned towards the opportunity artificial intelligence (AI) holds to expand insights, freeing the human potential by removing mental drudgery.  While this may sound like the realm of science fiction, Diane assured the audience that we engage with AI driven applications every day including commonplace experiences like talk-to-text, photo tagging and fraud detection.  On the horizon, cutting edge experiences like precision medicine, injury prediction, and autonomous cars all depend on the industry’s advancement of artificial intelligence capability.  Diane defined AI as a broad realm of compute methods including advanced data analytics, computer vision, natural language processing and machine learning.

Of course, Diane’s keynote could not be complete without mention of Intel’s planned acquisition of Nervana, announced last week.  Founded in 2014, Nervana has a fully-optimized software and hardware stack for deep learning. Their IP and expertise in accelerating deep learning algorithms will expand Intel’s capabilities in the field of AI, and the collaboration between Intel engineers working on the Xeon and Xeon Phi platform teams combined with Nervana systems team is expected to advance the industry faster than would have otherwise been possible.  After all, it’s the power of technical collaboration that has fueled the last two decades of data center innovation and it’s this power that we’ll harness together to fuel the next wave of data center innovation.