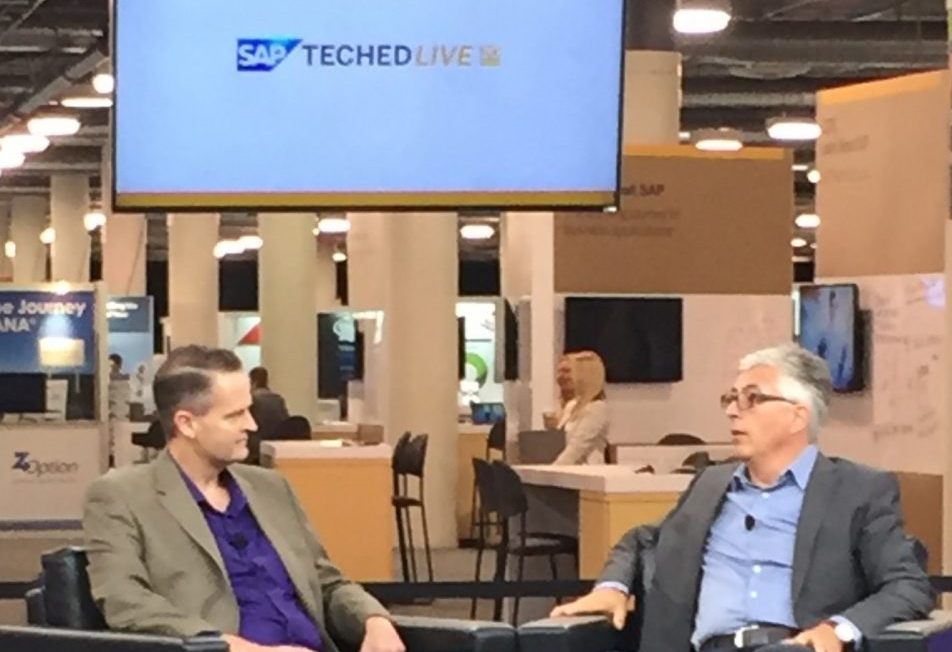 SAP TechEd is over for another year, and it was one for the record books. It was the 20th anniversary of SAP TechEd, and the show boasted over 1,300 technical sessions to educate and inspire more than 5,000 attendees from SAP’s growing ecosystem of partners and customers. TechEd is where engineers and IT specialists get “under the hood” to learn more about SAP’s latest innovations – particularly the newest additions to the SAP HANA* family of enterprise data management solutions.

Of course, Intel was at TechEd, too – Intel and SAP’s joint innovation on SAP HANA was front and center during much of the show. Here are some of the show’s highlights, with details about Intel’s latest contributions to the SAP HANA platform. The show kicked off with a Monday evening keynote that took Björn Goerke, executive vice president, corporate officer and head of technology for SAP, Back to the Future. Goerke, dressed in white jumpsuit in the style of the time-traveling mad scientist Doc Brown from the original 1985 Back to the Future film, pulled onstage in a vintage DeLorean and a cloud of smoke. Goerke’s riff was that his Doc Brown character needed access to a surge of electrical energy to blast his way back into time travel, so he commenced a hack into the Nevada solar energy grid to find a sufficient energy source. What followed was a very detailed live demonstration of the SAP HANA platform crunching through massive energy-based data sets.

While Goerke’s keynote really put the tech back in TechEd, it ended with him brandishing an Intel® NUC, the recently released mini PC that offers high performance Intel® Core™ processors in a pocket-sized form factor with a price of roughly $600. Goerke also announced the availability of SAP HANA, express edition, a version of SAP HANA available as a free download to developers. The upshot is that now not only do developers have free access to SAP HANA for application development and testing purposes, they also have a powerful and affordable mini PC that’s highly portable and built for developers on the go. It’s a developer’s dream to be able to run SAP HANA on a portable device, and the NUC is an ideal form factor for prototyping and learning to build for the new platform. Even more synergy if you run it on SuSE SLES in developer mode which is the number #1 OS HANA is deployed on in production environments.

SAP Chief Technology Officer Irfan Khan headlined Tuesday’s keynote, leading a discussion of how much the technical environment has changed over the 20-year history of SAP TechEd. Two decades ago, Khan said, we were developing on PCs with 386 processors, four megabytes of memory, 20 megabytes of storage, with 28 kilobyte dial-up modems to reach the beginnings of the Internet. 20 years later, our systems are vastly more powerful, with four gigahertz processors and upcoming nonvolatile memory technologies that combine memory and storage in one media, and that will offer 10 times the memory density and 1,000 times the performance of standard SSDs. The persistency of the HANA database with this new nonvolatile storage and memory media, which is currently under development by Intel, will provide levels of uptime not possible with today’s DDR4 dual in-line memory modules (DIMMs).

How do these innovations benefit actual companies? Khan brought Lenovo Vice President of Strategic Technologies Brian Connors to the stage to talk about how Lenovo simplified its architecture – already the largest SAP estate in Asia – by integrating all of its legacy deployments onto the SAP HANA cloud to optimize its supply chain and manufacturing operations. As a result, Lenovo was able to compress its data footprint from 33T to 4T, and has reduced the time it takes to run its entire Asia-wide supply chain analytics from 11 hours to just six or eight minutes. By integrating Lenovo’s supply chain onto the SAP HANA cloud powered by Intel® Xeon® processors, Connors estimated that Lenovo realized a cost savings of $50 million. Speaking of SAP HANA express, Intel’s Global SAP Alliance Manager Detlef Poth and I appear in a video on the SAP HANA Facebook site. We discussed how Intel maintains its own developers onsite at SAP headquarters in Waldorf, Germany to lead very early “pathfinding” between the two companies’ new technologies, ensuring that Intel processor and SAP software innovations are aligned from the start. We also discussed the history of the Intel NUC and how, in conjunction with SAP HANA express, this small form-factor PC has the potential to drive startup-like creativity for enterprise developers.

For the SAP TechEd Online video series, I interviewed Detlef about the history of Intel and SAP collaboration on SAP HANA and how the companies’ co-engineering has created a platform that reduces complexity while delivering the extreme processor and memory performance necessary for real-time in-memory data processing. Detlef and I also talked about how the Intel Xeon processor E7 family maintains TCO leadership in the SAP HANA ecosystem, and expressed our excitement to get our hands on an Intel NUC and load it up with SAP HANA express!

What were your favorite moments at SAP TechEd? At the show we also tried out TINT on #IntelSAPTechEd with much success. Share your thoughts and be sure to follow me at @TimIntel for the latest news on Intel and SAP.