Over the past few days, there have been a number of announcements in the optical world from Corning, US Conec, TE Connectivity , Molex and others in support of the new MXC™ connector technology that are quite exciting. Before I get into what they announced, I should answer why I’d be excited about a simple connector.

First off, it’s because it’s not just a simple connector. It is a core building block for optical (or photonic) communications and will help define the way data centers are built in the future. Why should you care? Because it will help serve up all of what you love about the web, apps, and more much, much faster.

For example, one MXC™ cable can transmit data at 1.6Tera-bits per second (64 fibers at 25Gbs). That’s 1,600,000,000,000 bits per second. If you could transmit data at that speed, you could download a two-hour HD movie from iTunes (4GB) in less than two seconds. With 2.5 quintillion bytes of data (1 followed by 18 zeroes) created every day, I doubt anyone questions that we are going to need the higher bandwidth that MXC™ cables provides in our 21st century data centers.

To make this a reality, the industry needs to work together. This is where the exciting announcements come in. US Conec announced they are making parts for the connector which they will sell to cable companies. Corning, Molex and TE Connectivity announced they would make cable assemblies using the MXC™ connectors. US Conec and Intel will also host an MXC™ adopter’s forum for current and future companies that want to use MXC™ cables at OFC on March11th, 2014. All of this together means that the ecosystem is lining up and momentum for this technology continues to mount.

Microsoft had the following to say about MXC™ technology:

“Microsoft is pleased to join the MXC Adopters Forum and looks forward to evaluating MXC based products“ said Kushagra Vaid, General Manager of Cloud Server Engineering at Microsoft. “We believe that MXC along with Intel® Silicon Photonics will be instrumental in shaping next generation high performance data center architectures. We look forward to working with Intel and open standards bodies like OCP to accelerate information sharing and industry adoption”.

For those new to this topic, MXC™ cables have several advantages over traditional optical connectors besides the 1.6Tbps bandwidth. MXC™ connectors have fewer parts, are more robust, smaller, and are able to support 64 fibers and with a unique telescoping lens design that is 10 times more resistant to dust.

MXC™ connectors, coupled with Intel® Silicon Photonics, will enable many new data center innovations. For example, Fujitsu recently demonstrated an expansion box that increases the storage capacity and adds CPU accelerators to its 1U server. In September, Intel demonstrated a new rack architecture called RSA that when used with MXC™ cables and Intel® silicon photonics enables a totally new server architecture that increases performance and decreases cost. In the coming months, we expect to see more demonstrations and announcements about MXC™ and Intel Silicon Photonics.

Finally I wanted to say that we expect to see a few dozen companies attend our 1st MXC™ adopters meeting in March 11th at the Optical Fiber Conference.

2014 will be an exciting year so stay tuned!

You can get more information on Intel® Silicon Photonics and MXC technology at:
https://www-ssl.intel.com/content/www/us/en/research/intel-labs-silicon-photonics-research.html.

MXC is a trademark of US Conec 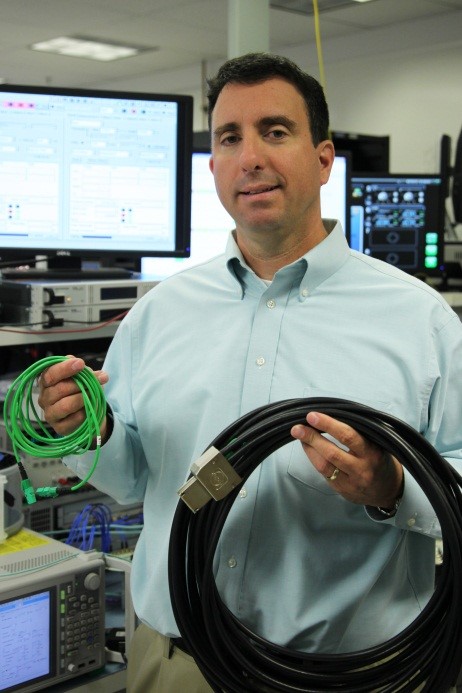 Mario Paniccia with a 1.6Tbps MXC cable (green) next to a 128Gbps PCI Express copper cable

Paniccia earned a bachelor's degree in physics in 1988 from the State University of New York at Binghamton and a Ph.D. in solid state physics from Purdue University in 1994. In May 2009 Paniccia was awarded an honorary doctorate degree from Binghamton University.

From humble beginnings—raised by parents who emigrated to the U.S. from Italy in 1957—Intel Fellow Mario Paniccia was named in 2008 “one of the world’s most recognized corporate researchers,” according to R&D magazine.