At this year’s Interop show, Intel and many of our closest friends including end customers, system companies, and optical companies announced support for the 100G CLR4 Alliance. Behind the techy name are very important issues that this Alliance is trying to address.

The first issue is growth. For any industry to expand there needs to be industry-wide specifications or standards that ultimately make things work better together and more importantly, drive down costs. At Intel, we have worked with the industry many times and have helped to enable countless standards in the PC and data center market that has allowed for explosive growth for these industries.

Second, photonic communication is a great way to move data. Optical has the known benefits of moving data further than electrical links, transmitting data faster and not being affected by EMI. As we move from 10Gbps signaling to 25Gbps signaling, optical communication becomes even more important.

Need for longer reach in the data center

Data centers are becoming massive in scale, requiring longer and longer reaches for connectivity. This leaves an enormous opportunity to bring high-speed, low-power, optical links that can span up to 2 kilometers in modern data centers operating at data rates up to 100Gbps. That’s more than 20 football fields!

Yes, there are telecom centric optical transceivers today operating at 100Gbps, but their power, size and costs are non-starters for the new data center. Thus, there is a huge gap that needs to be filled for reaches that span from say 100m to 2km. And that’s the problem we are trying to address here.

Intel, along with Arista and many others, decided to form an open industry group to rally around a specification that addresses the “up to 2km” data center reach. This approach leverages much of the work done in the standards body but focuses on moving fast. The 100G CLR4 mission is to create an open, multi-vendor specification for a cost-effective, lower power, small form factor optical transceiver using duplex single mode fiber which reduces fiber count by 75 percent. (See key attributes of proposed solution in Figure 1 below.) 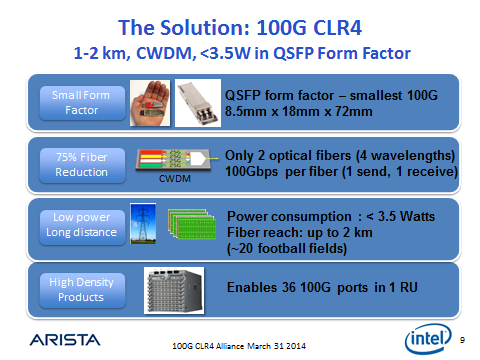 In the span of a few weeks, we have already received overwhelming support for the specifications above.  Here is a list of preliminary supporters for this new alliance. 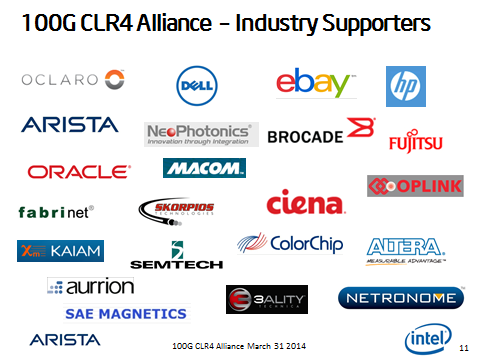 One of the key voices behind the 100G CLR4 Alliance is Andy Bechtolsheim, founder, chairman, and chief development officer of Arista Networks.

“Arista is excited about the 100G CLR4 Alliance," said Andy. “We need to accelerate the time-to-market for cost effective low-power, 100G CRL4 QSFP form factor optics that address the 2km reach requirements of large data center customers. We believe an open multivendor effort is the best way to bring this to market.”

In the meantime, you can find more information on the news, Intel Silicon Photonics and MXC technology here.

From humble beginnings—raised by parents who emigrated to the U.S. from Italy in 1957—Intel Fellow Mario Paniccia was named in 2008 “one of the world’s most recognized corporate researchers,” according to R&D magazine.