$26,000 awarded to National Center for Women and Information Technology charity

The Coding Illini, a team from NCSA and the University of Illinois at Urbana–Champaign, was declared the winner of the 2014 Intel® Parallel Universe Computing Challenge (PUCC) after a final competition that had plenty of excitement as both the Coding Illini and the Brilliant Dummies met their match with a tough coding round.

The final challenge was more substantial than prior matches and was the only one this year that used Fortran. The larger code was the undoing of both teams, as each made more changes than they were able to debug in their short ten minutes. The Coding Illini added to the drama when their final submission contained an error in their coding which appears to have broken the convergence of a key algorithm in the application. Their modified application continued iterating until long after the victor was declared and the crowds had dispersed. Co-host of the event, James Reinders, suspected both teams were only a few minutes away from success based on their progress and if either team had tried to do a little less they could have won easily by posting a programming result. The Coding Illini were declared the winner of the match based on the strength of their performance in the trivia round. Based on the Illini’s choice for a charitable organization, Intel will award the National Center for Women and Information Technology a donation of $26,000. 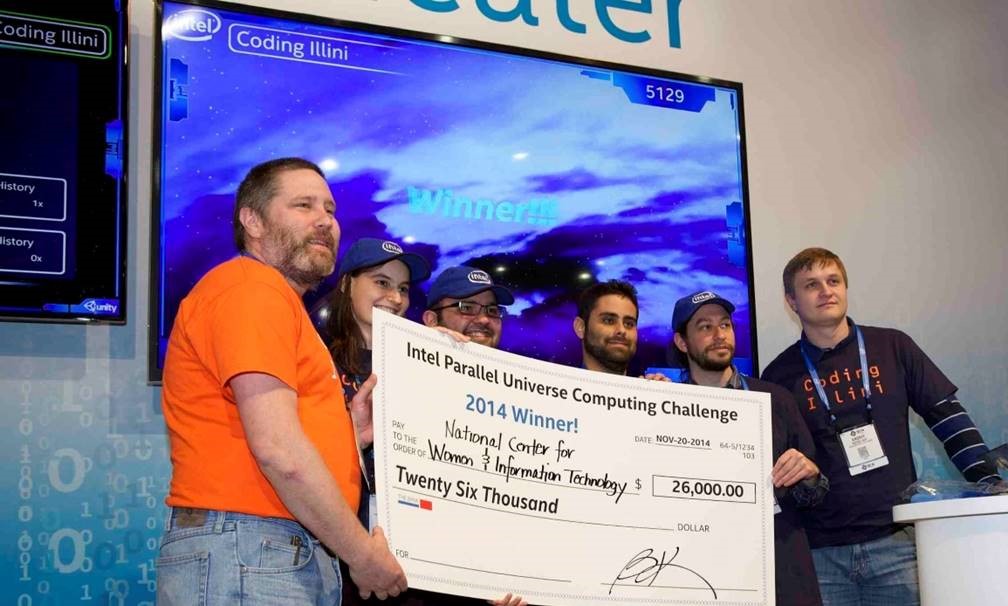 The Coding Illini, who were runners-up in the 2013 competition, celebrate the charitable award Intel will make to the National Center for Women and Information Technology on their behalf. The team includes team captain Mike Showerman, Andriy Kot, Omar Padron, Ana Gianaru, Phil Miller, and Simon Garcia de Gonzalo.

James later revealed that all the coding rounds were based on code featured in the new book High Performance Parallelism Pearls (specifically based on code from Chapters 5, 9, 19, 28, 8, 24 and 4, in that order. The original programs, effectively the solutions, are available from http://lotsofcores.com.) The competition problems were created by minimally changing the programs through the deletion of some pragmas, directives, and keywords associated with the parallel execution of the applications.

This year’s PUCC at SC14 in New Orleans started with broad global participation with three U.S. teams, two teams each from Asia and Europe, and a Latin American team. In recognition of SC’s 26th anniversary, the teams were playing for a $26,000 prize to be awarded to the winning team’s selected charity.

On the opening night of the SC14 exhibition hall, last year’s winners, the Gaussian Elimination Squad from Germany who were playing for World Vision, eliminated their first round opponent, the Invincible Buckeyes from the Ohio Supercomputer Center and the Ohio State University who were playing for CARE. The German team had a slight lead after the first round that included SC conference and HPC trivia. Then their masterful performance in the coding round even amazed James Reinders, Intel’s Software Evangelist and the designer of the parallel coding challenge.

In the second match, The Brilliant Dummies from Korea selected Asia Injury Prevention Foundation as their charity. They faced off against the Linear Scalers from Argonne National Lab who chose Asha for Education. After round one, the Brilliant Dummies were in the lead with their quick and accurate answers to the trivia questions. Then in round two, the Seoul National University students managed to get the best Intel® Xeon™ and Intel® Xeon Phi™ performance with their changes to parallelize the code in the challenge. This performance cemented their lead and sent them on to the next round.

With the first two matches complete, the participants for the initial semi-final round were now identified. The Gaussian Elimination Squad would face The Brilliant Dummies.

Match number three, another preliminary round match, pitted Super Computación y Calculo Cientifico (SC3) representing four Latin American countries against the Coding Illini. The Coding Illini had reached the finals in the 2013 PUCC, and were aiming to improve their performance this year.  This was the first year for SC3, who chose to play for Forum for African Women Educationalists. In a tightly fought match, the Coding Illini came out on top.

In the final preliminary round match, Team Taiji representing four of the top universities in China chose Children and Youth Science Center, China Association for Science and Technology for their charity. They faced the EXAMEN representing the EXA2CT project in Europe and were playing for Room to Read. The team from China employed a rarely used strategy by fielding four different contestants in the trivia and coding rounds of the match and held the lead after the first round. Up until the very last seconds of the match it looked as though Taiji might be victorious. However, the EXAMEN submitted a MAKE at the very last second which improved the code performance significantly. That last second edit proved to be the deciding factor in the victory for the team from Europe.

So the Coding Illini would face the EXAMEN in the other semifinal round.

When the first semifinal match between the Gaussian Elimination Squad and The Brilliant Dummies started, the Germans were pretty confident. After all, they were the defending champions and had performed extraordinarily well in their first match. They built up a slight lead after the trivia round. When the coding round commenced, both teams struggled with what was a fairly difficult coding challenge that Reinders had selected for this match. As he had often reminded the teams, if they were not constrained by the 10 minute time limit, these parallel coding experts could have optimized the code to perform at the same or even better level than the original code had before Reinders deconstructed it for the purposes of the competition. As time ran out, The Brilliant Dummies managed to eke out slightly better performance and thus defeated the defending champions. The Brilliant Dummies would move on to the final round to face the winner of the EXAMEN/Coding Illini semi-final match.